Shaken to the Core by Marjorie Parker 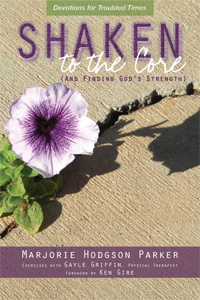 I (Debra) have had the pleasure of meeting a North Texas author who is known for her children’s books, but has recently published a devotional book for adults which I found unique, helpful, and beautiful. It’s kinda amusing the way we became acquainted with each other. For years now, the lady who does our taxes has been trying to get me to call this author because our tax lady felt the author could help get me published. Unfortunately, that’s not the way the industry works, so I never did call. However, this year as I sat down to do my taxes, I saw this beautiful devotional book on our tax lady’s desk.

As I flipped through the pages, I was in awe. This beautiful book targets an audience needing hope and comfort for troubled times. The devotional also has segments which draw upon a physical therapist’s insights. There are powerful personal stories and timeless truths from the Bible, these devotions for troubled times offer hope and comfort. Tying body and soul together in a unique way, each devotion contains spiritual workouts as well as gentle exercises and stretches for those able to perform them.

So, I decided to call this author and had a delightful conversation with her. This led to me requesting an interview with her. She readily agreed. 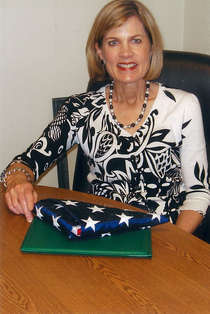 Tell us a little bit about yourself.

I grew up in Fort Worth, Texas, and loved writing from the time I was very young.  My neighborhood friends and I created a newspaper we called “The Crestwood Poop,” and we gathered news from neighbors, typed it (longest story was probably 5 lines) and then sold it door to door for 10 cents.  We had a blast.

I come from a long line of writers, starting with my great-grandmother.  My mom said that as a very young child I told her, “I like it when I hear the clack-ity-clack of your typewriter, because then I know you’re happy.” Mom was often in her home office typing a story or writing on a book about her adventures as a Women’s Airforce Service Pilot (WASP) in WWII. (She finally got that book published when she was 70!)  Mom taught me all I know about writing, along with the teachers in high school that took an interest in me and my Texas Tech journalism professors. To graduate with a journalism degree, I was required to have a story published in a slick magazine, which I did, and to serve as newspaper intern, which I did at the Fort Worth Star-Telegram.  (I probably learned one of the most important things for a writer at the Star-Telegram – they forced me to think at the typewriter instead of writing in longhand and transposing to type.  That was invaluable later.)

Then when I married Joe and moved to the country to his family’s ranch (we were on the banks of the Red River – beautiful, and remote!), I sold my first fiction about a fire we had on the ranch (in the Country Gentleman magazine).  I also became a part-time feature writer and columnist for the Wichita Falls Times/Record News.  I retired from the paper and started free-lance writing after our daughters were born, and wrote some children’s stories in my free time.  I had many, many rejections!  But my ever-encouraging Mom said, “The difference in being a writer and being an author is keeping on keeping on until you finally get published.”  Standard Publishing finally gave me my start, accepting my devotional book “Fun Devotions for Kids,” then another, “Jellyfish Can’t Swim,” then two stories for an anthology, “God is On Your Side.”  I was really on a roll until my editor got promoted to another area, and the new editor never took another thing from me!

What do you find most challenging about writing?

The most challenging thing to me is marketing. It’s so much fun to write it (and even re-write and edit) and it’s so hard to sell it!  Right now some really major marketing changes are happening, too. I’ve lived through many changes, though.  In my 40 years of writing, I’ve morphed from using a typewriter and correction ribbon to a computer, from queries to e-queries and hardbacks to e-books.  Thankfully, my technologically challenged self can use a computer, although I curse the thing a bit more often than I bless it!

You are a native Texan. In your children's books, do you use Texas as your settings?

My first success with non-devotional children’s books was with a publisher that I met at a Cattle Raiser’s convention through a friend of mine. This small publisher, Bright Sky Press, loved anything with a Texas flavor and liked to encourage new writers.  Luckily, Texas was the setting in “Assault, the Crippled Champion” which was based on the true story of a King Ranch horse named Assault, who was crippled as a colt and limped so much that no one thought he’d amount to anything.  He went on to become Texas’ only born and bred Triple Crown Champion. I heard that story while visiting King Ranch and was given permission to write it for kids. (And, coincidentally, the publisher happened to be very good friends with a member of the King Ranch family.)

In “David and the Mighty Eighth,” the setting is WWII England, where our 8th Air Force was stationed.  One of the heroes in it is a pilot named “Tex” since I knew that would appease my “Texas niche” publisher.  This story, too, is based on a true story.  It’s about a boy growing up in war-torn England who had a wonderful relationship with an American flight crew.  Joe and I have become close friends with that man and his wife, and they’ve visited us and vice-versa.  THAT book promotion was fun – we spoke at the 600-year-old British school where David attended, and I was interviewed on the BBC!

Tell us about your new devotional book. The idea of combining physical, emotional, and spiritual healing is such a clever idea. How did you come about the idea?

My writing for adults has mostly been with Daily Guideposts (writing devotionals) and Guideposts.  My first adult book has recently come out – entitled “Shaken to the Core (And Finding God’s Strength)”.  You asked how I came about the idea – it was God’s idea!  Really!  I was walking into a hotel room – not even praying or reading the Bible – when a very distinct voice inside my head said, “I want you to write a devotional book about the human body.”  It’s funny that I wasn’t what my kids would call “weirded out” by receiving a message like that. I was surprised, but mainly I was excited.
When I got home, I started researching body trivia to write a children’s devotional book, since my experience was in that genre.  However, when I sent a few chapters to my editor (one that I paid for writing advice), she told me it was too much like a science lesson and wouldn’t interest kids.  So I filed it away, thinking I’d misunderstood what God meant. I awaited further instruction.

Have you had an experience where you have found your devotional useful?

It was probably 8-10 years later that I developed a “mystery illness” that left me so exhausted, achy and shaky, that I couldn’t do much of anything.  And in prayer I asked God to show me His purpose in that suffering, since I certainly wasn’t able to do anything for Him in the shape I was in. Right as I prayed that prayer a-knowledge (not a voice this time) came into my head that I would have to suffer a little before I could write about it. And I immediately knew – I’d just received the final instruction for that body devotional book!  It was to be directed toward suffering people – adults!  I started right away on the book, and it was the most joyful period of my life as I researched scripture, interviewed people going through hard times, and used my own family stories to give others hope.

Many ideas of body trivia came from the physical therapy I was taking, so I asked my Physical Therapist if she would design exercises to go with each devotional.  I researched a lot for body facts, too.  My very kind stomach doctor checked my information to be sure the facts were right, and Ken Gire, a wonderful author and high school friend of mine, gave me great suggestions when he edited it.  And of course, my dear Mom was my #1 editor and helper.  I couldn’t have done it without her suggestions and help. (I finally discovered what was wrong with me while writing the book, and I tell about that in it. It turned out to be a “perfect storm” of inflammation, hypoglycemia (low blood sugar), and disc degeneration.)

When I was diagnosed with breast cancer last spring, I was in the final edits of the book (which I had thought was “late” since it had been scheduled to come out in the spring).  When I got the cancer phone call, I had just re-read the whole manuscript and been freshly reminded of God’s promises, His power, grace, help and hope. I felt an incredible peace that lasted through the mastectomy and recovery.  I had thought I was writing the book for others, but it wound up comforting ME!  God has a wonderful sense of humor.

What plans do you have for your next writing project?

I have two ideas for new writing projects, but can’t quite figure out how to carve out the time to do them just yet – we’ve got a daughter marrying this summer, and I’m trying to promote my new book, plus travel with my husband’s volunteer job as President of Texas and Southwestern Cattle Raiser’s Assoc. But both ideas are for young readers, and I suppose it’s because now that I’m a very delighted grandmother, kids are at the center of my heart once again.

To purchase a copy of Shaken to the Core visit this web address:
http://www.brightskypress.com/infostore/ca.cart.asp?sAction=DisplayDetails&pid=198