Sometimes in life an opportunity comes along that you know you were meant to accept. The announcement for an online class called Defeat Self-Defeating Behaviors by Margie Lawson appeared on a writers’ loop the first week in January. I clicked on the link, read about the course, and enrolled before procrastination let the opportunity slip by.

Defeat Self-Defeating Behaviors is a four-week, nine lecture series developed by Margie Lawson. She begins by asking the student to identify her own self-defeating behaviors. The remainder of the course addresses how to overcome those practices and attitudes that prevent a successful approach to writing. About twice a week, a lecture, averaging between twenty and thirty pages, is posted with assignments to be completed. Author interviews at the end of each lecture address their advice about writing.

One thing I recommend is keep up with the homework and read the student responses posted online. I took a previous course and quickly fell behind because I didn’t work on it every day.

Margie Lawson could publish her material as a book and spare herself the time and effort it takes for the interaction of an online course, but she includes answers and comments on student work to help them understand and grow while taking her class.

I’m glad I seized the opportunity and took the course because I’ve identified my self-defeating behaviors that kept me from pursuing my dream of being a writer. I’ve already enrolled in another class on Empowering Characters’ Emotions. I’m also thinking of taking the Deep Editing class again, but this time I’ll keep up with the lessons.

You can read more about the online courses she conducts and her speaking schedule by logging on to www.MargieLawson.com. Go for it. You’ll be glad you did.
Posted by Moonine Sue Watson at 7:46 AM No comments:

Conflict is that dreaded ingredient for which each of us searches. If a writer has a good solid plot and loveable characters, but has no conflict, the story fails.

To the end of deepening the conflict in my stories, I recently read "Conflict, Action & Suspense" by William Noble. He started by comparing our school days show and tell sessions as a way to portray information in an interesting format. Better to bring your pet duck to school rather than tell us what the duck looks like. Noble offers examples of good and better, active and passive which helps us get his points.

I love dialogue, so enjoyed chapter five, using yes/no or well, maybe along with the threat of the unsaid to heighten conflict and/or suspense. From the step by step method, we learn the use of atmosphere and mood. Character development adds spice of its own. Will the character be able to stand against the storm coming? So far, I've tackled only one suspense manuscript, but when I wrote it, I wished I'd had the chapter on sublety and misdirection. Sherlock Holmes could be fooled with this approach. Add in how Noble uses time and place along with pacing, and we have a real helper for our problems with conflict.

I recommend it as a tool to keep on hand for reference when the story becomes boring.
Posted by Unknown at 3:48 PM 1 comment:

Roget’s Thesaurus of Phrases by Barbara Ann Kipfer, PH.D.
As writers, we struggle with enough challenges like time management and writer’s block. We need all the tools we can find to alleviate the frustration and help us get the perfect words on the page. For instance, have you ever wanted to come up with alternative wording for such clichés as pass the buck, right-hand man, or the cat’s meow but did know where to look? The Roget’s Thesaurus of Phrases is the reference you need, but you may not be aware of its existence!
The Roget’s Thesaurus of Phrases is a list of ten thousand multiword entries with synonymous phrases, organized alphabetically in conventional thesaurus format. This reference is another tool I employ to avoid using worn-out or repetitive phrases and to add distinction to my writing. It is easy to use and can be a life saver for those times when I can’t seem to put a finger on the wording that I want to use.
This reference not only helps with my writing but also my research. I can retrieve more precise information when I enter alternative phrases on the “Google” search bar.
At the back of the book, the author includes a very handy phrase maker—a list of words that can be paired with specific synonyms—perfect for freshening up any hackneyed phrase.
Along with the Flip Dictionary, also by this author, I highly recommend Roget’s Thesaurus of Phrases for writers.
Posted by Shirley Harkins at 5:17 PM 2 comments: 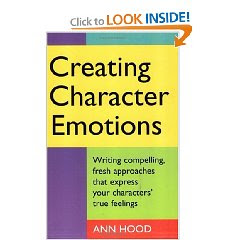 Ever since I attended Margie Lawson's ACFW workshop on Empowering Character Emotions, I've hungered for more information on character's visceral responses. I intend enrolling in Ms. Lawson's month-long course in character's emotions. Until then I'll read books on the subject.

Creating Character Emotions by Ann Hood is the first book I read. After a short introduction and chapter on tightening fiction, the reference begins. Thirty-eight different emotions are outlined.

Each chapter of emotion offers a lesson on the sentiment, giving "good" and "bad" examples of prose. The chapters end with exercises to stretch the readers writing skills.

This is a decent reference tool to have among your how-to books. However, if you want a more in-depth study on how to write character's emotional responses, sign-up for one of Margie Lawson's online classes.
Posted by Debra at 10:34 PM 2 comments: