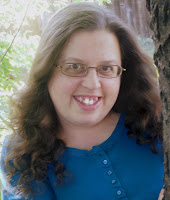 Here at Books To Write By we have faithfully given reviews of books that has helped each one of us learn to write better. Occassionally, we add a fiction book that we really love.

But today we are so excited to have our first ever author interview. The reason for our excitement is that our own critique partner and friend, Stephanie Gallentine has sold her first novel and it is releasing this month! What a cause for a celebration! (And it's also nice to see our name in print on the acknowledgement page! Whoo-Hoo!)

We also have a free book to give-away!!! If you would like to own a copy of Refuge, please leave a comment on this post. Please be sure to leave your email address. If you are not comfortable leaving your email address in the comment section, you may email me: debra(at)debracalloway.com. Next Sunday we will announce the winner of Stephanie Gallentine's debut novel , Refuge.

Raised in North Texas, Stephanie spent much of her childhood making up stories filled with action, adventure, and angst. From the time she was a young teenager, she started scribbling those adventures down on paper.

Years later, she met and married her husband, Robert. They have two fabulous children, Heather and Andy. Now, Stephanie spends her days working as a school cafeteria manager. After work, she lets her imagination run free on her computer as she writes her stories.

Her first story, Refuge, is due out this August from Word Aflame Press.

Stephanie, it truly is a pleasure for me to conduct this interview. (Hopefully, Sue, Janet, and Shirley will forgive me for not giving them the opportunity to do this first. :O)

1. What made you start writing?

I’ve been making up stories since I was a young teenager, but only started writing seriously a little over 3.5 years ago. I was going through a difficult storm in life and realized I need to quit focusing on the storm. I committed myself to doing something for God instead. Writing was that something.

2. When did you sell your first book?

I received my first contract earlier this year from a small publisher.

3. What are you working on right now?

Another YA mystery with a working title of A Name in the Stars.
While working on a genealogical school assignment, two teens discover a twelve-year-old cold case mystery involving the disappearance of identical twins and find they are searching for themselves.

4. Okay, I have to ask this question since this is the focus of our blog: Which books are the most helpful non-fiction, craft of writing books you have read?

Techniques of a Selling Writer by Dwight Swain

Getting into Character by Brandilyn Collins

5. So, which fiction books have helped you learn certain aspects of writing?

I’m not sure I could narrow it down to one specific book. I’ve always read a lot and growing up there were always certain books I read over and over and others I didn’t, and what I liked wasn't dependant on a certain genre. One day I found out it wasn’t the genre but the structure of the books that I liked. All the books I really like have a balance of conflict and comfort. I tried to mimic that when I’m writing.

6. When you first started writing what was your biggest roadblock and how did you overcome it?

Learning to write. When I first began writing seriously, I realized from feedback I knew how to tell a story, but didn’t know how to tell the story right. You mean I need a refresher in punctuation? What’s POV? MRU? But every time someone pointed out something I didn’t know, I did a search for articles, books, anything to help me understand it and then I did a rewrite.

7. What is your favorite food to munch on while writing?

8. What is your writing schedule?

Is that a trick question? It’s one thing in my life that needs more focus. I like to write in the mornings but life doesn’t always work that way.

9. Which writing organizations do you belong to?

10. Do you have any advice for other writers?

Never give up. Keep learning. Keep writing. If we feel writing is God’s calling on our lives, then whether we continue to write or not cannot be based on the receipt of a contract or landing an agent, but rather commitment to do His will.

11. How can readers find you on the Internet? Where can they buy your book?

(If you want an autographed copy, please contact me and use Paypal.)

12. Tell us about the book you have out right now.

After being forced to plant a computer virus, a teenage hacker must find a way to expose the real criminal without revealing the secrets of his troubled past.

Sixteen-year-old Kevin Ramsey refuses to be sent back to juvenile detention for a crime someone forced him to commit, even if it means running away until he can find evidence to expose the true criminal. During a penetration test, Kevin discovers a computer file indicating William Tyke, co-owner of a local travel investment company, may be investing in more than overseas properties—his own offshore bank account and leaving Kevin’s father to take the blame.

Against his wishes, Kevin is flown to a remote location to keep him safe. However, no place is safe as long as Kevin holds the computer file with information vital to retrieving the money from the offshore account as well as possible evidence of an earlier unsolved crime. William Tyke plans to use any means to get it back, and Kevin’s father refuses to seek help from the police. Kevin must trust someone to help him, even if discovering the truth uncovers painful family secrets he’s been taught no one can know.

13. Please give us the first page of the book.

One hour and fifty-nine minutes.

Sixteen-year-old Kevin Ramsey shoved his hands into the fleece-lined pocket of his hoodie. His fingers, stiffened by the cold, clasped the folded bus ticket. In less than two hours he would be free and for the first time, in control of his life.

He quickened his pace against the chilling January wind. White flecks of snow swirled about him, dotting his jacket, and melting within seconds. He shivered and pulled the straps of his backpack tighter. A sudden gust of wind blew his hood off and dark strands of baby-fine hair whipped in his face, catching in his glasses.

Frowning, he tugged his hood back on and double-checked the zippered interior pocket for papers that showed his new identity. Sean Childers. He repeated the name under his breath. Puffs of frozen air escaped his lips and disappeared—like he would, once he got out of McKeltic, Texas. Finding him would be like finding Cosmic Warrior’s secret identity. No one would know who to look for. His own life proved that. In the twelve years since his original identity had been changed no one had ever guessed he had a secret past. Why would this time be any different?

His cell phone chimed. Kevin slid it open and read the text message from his best friend, Aiden Rollings.

Kevin nodded and then texted a reply. Galactic Jitters, a popular sci-fi coffee shop, was only a few blocks out of his way. He could meet Aiden and still make his bus. He shivered and folded his arms tight across his chest. At least at Galactic Jitters, he wouldn’t freeze into a human iceberg.

As he turned onto Marsh Avenue, a truck with oversized wheels sped by, spraying the sidewalk with the gray slushy remains of last night’s snowfall. Kevin jumped back but slush seeped into the fabric of his jeans and forced the chill deeper into his bones. He glared at the offending truck and wished for a snowball-encrusted rock. A glimpse at the ground told him he’d have to forego revenge. Nothing underfoot but rock salt and barely visible snow flurries.

Two blocks later, Kevin hurried to the entrance of the familiar hangout. Inside, the rich aromas of coffee and vanilla wafted through the air, while overhead hundreds of artificial stars glimmered through the black ceiling. Teens clustered at tables, around laptops and video games, surrounded by a wall-to-ceiling space mural.

“Hey, Kevin.” Joe, the owner, waved to him from behind the counter and wiped his hands on his apron. “The usual? Quadruple shot mocha latte?"

Kevin nodded and then inched back his sleeve to uncover his watch.

One hour and forty-five minutes. Freedom was so close.

He paid for his drink and headed to the back corner booth where Aiden sat. Sliding into the bench seat, Kevin wrapped his cold hands around the steaming cup and breathed in the vapors.

He tipped back his head and let the hot coffee slide down the back of his throat. “What’s up? I thought your mom had you on lockdown.”

Aiden brushed at charcoal bangs that shaded his half-opened hazel eyes. A mischievous grin pinched his fever-tinged cheeks. “She did but her boss called her in for a couple of hours. I figure by the time she gets home, I’ll be back in bed.”

“You shouldn’t have come.”

“I had to.” Aiden cupped his hands in front of his face, muffling his sneeze. “I wanted to see if you’d changed your mind.”

Kevin stared down in his coffee and shook his head. “No, but the bus doesn’t leave till five. We can hang out here till then.” His cell phone vibrated in his pocket. He pulled it out and grimaced when he saw the caller. “It’s my dad.”

“You think he found out?”

“Nah, I doubt it.” Too bad Kevin’s nerves didn’t agree. Beneath his hoodie, his heart raced at the speed of light. “He couldn’t have. Right?”

“I just hope they don’t send you back to juvie.”

One quick push of the ignore button and the vibrating ceased. Kevin pressed his lips together and narrowed his eyes. “They won’t.”

In the past year, he had spent more than his share of time in juvenile detention. He wasn’t going back. Especially since it wasn’t his fault—this time. But who would believe him? He was a juvenile delinquent and like a character in one of his comic books, Kevin bore his label. The world labeled them—some heroes, some villains. But every character had one thing in common. They longed for a place their reputation didn’t follow them, a place they didn’t have to fight, a place they could just be normal. But did a place like that even exist in the real world?

“You need to tell someone about the file you found that night,” Aiden said.

“Then why are you running?”

Kevin clenched his fist and leaned forward. “You know why.”

“Just let me tell my dad like we should have done in the first place. Let me tell him about everything.” Aiden voice held a touch of pleading. “I’ll make him believe you.”
Everything.

“But you need his help.”

Kevin crossed his arms while his gaze shifted to make sure no one was close enough to hear. “I wouldn’t be so sure about that.”

Aiden set his cup on the table. His hazel eyes grew round as the twin planets painted on the wall mural behind them. “Oh man, what did you do?”

Thank you, Stephanie for your time! I hope one day soon we can do this again!